Well, Do you know whose picture is this ? This is one of the most famous story throughout the world and it has been translated and adapted into many languages. Is it a real story or a fiction ? After this we will discuss more about it through a text which is called narrative.

Narrative is a text which is created to entertain, to gain and hold a readers' interest. However narratives can also be written to teach or inform, to change attitudes / social opinions eg soap operas and television dramas that are used to raise topical issues. Narratives sequence people/characters in time and place but differ from recounts in that through the sequencing, the stories set up one or more problems, which must eventually find a way to be resolved.

There are many types of narrative. They can be imaginary, factual or a combination of both. They may include fairy stories, mysteries, science fiction, romances, horror stories, adventure stories, fables, myths and legends, historical narratives, ballads, slice of life, personal experience. 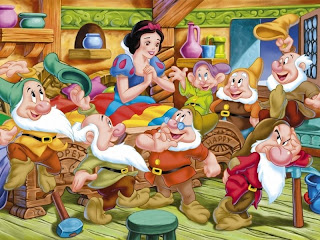 These are the generic structure of a narrative text;
Orientation:
introduction of the story in which the characters, setting and time of the story are established. Usually answers who? when? where? and it is stated in the beginning of the story. as the example "Once upon a time, Mr Wolf went out hunting in the forest one dark gloomy night".
Complication or problem:
The complication usually involves the main character(s) (often mirroring the complications in real life).
Resolution:
There needs to be a resolution of the complication. The complication may be resolved for better or worse/happily or unhappily. Sometimes there are a number of complications that have to be resolved. These add and sustain interest and suspense for the reader.

The language features of the narrative text are:
- Usually use simple past tense
- Use Connectives,linking words to do with time such as once upon a time, on the next day,etc.
- there are imagery such as metaphor for example "She has a heart of stone"

Here, the example of the narrative text can be seen through the following link;
http://www.candlelightstories.com/audio/three-little-pigs/

Here you can see the text and listen the audio as well.

The first sentence (Once upon a time there were three little pigs. )is called as an orientation. Now, it's your turn to determine the complication and the resolution.

As your homework, listen to the following story and make the summary of the story. Submit it to your teacher next week.